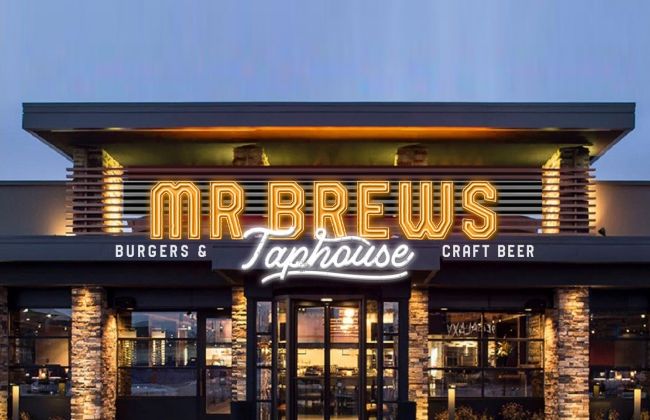 Birnamwood, WI  (RestaurantNews.com)  Out with the old and in with the brew… or new, in this case, as Mr Brews Taphouse modernizes its original logo ahead of its 10th anniversary in 2023.

After mastering the quintessential all-American burger and offering one of the widest selections of craft beer anywhere, the 15-unit craft brew pub and restaurant is setting its sights on its next era of excellence by adopting a revitalized logo that better reflects the visual identity of the brand.

“Our logo revamp has been months in the making and we’re proud to share the first glimpse at the future of Mr Brews,” said Chief Operating Officer Mark Leach. “Although the current logo has served our brand well since its inception, we decided to present our fanbase and future franchise operators with a simplified version that is as modern and welcoming as our restaurant itself!”

While creating the new logo, the pub wanted to give some of the Brew Crew – including select franchisees – an opportunity to voice their opinions during the creation of the new design. Moving forward, Mr Brews will incorporate the new logo into all future locations and gradually phase it in at all existing locations.

“Inviting current franchise partners and team members to be a part of this process was critical to our success,” added Leach. “During this collaboration, we collectively agreed that we needed a design that reflected the times and our brand’s one-of-a-kind atmosphere. We believe the finished product embodies who we are, which is a welcoming pub where family, friends and neighbors can come together to enjoy gourmet burgers and craft beer.”

Each Mr Brews location offers a selection of more than 50 beers on tap that are carefully selected by the franchisee to include personal local favorites, popular national pours and rotating taps from the region’s seasonal collections. To complement its wide selection of beers, Mr Brews offers award-winning gourmet burgers paired with delicious scratch-made signature sauces.

Founded by Steve Day in 2013, Mr Brews Taphouse is headquartered in Birnamwood, Wisconsin. Mr Brews Taphouse is a full-service craft brew pub and restaurant known for its gourmet burgers and wide selection of locally sourced craft beer. The craft beer industry is continuing to grow and with more than 50 craft brews on tap at each location, Mr Brews Taphouse is growing right along with it. The brand currently owns and operates 15 locations throughout Arizona, Florida, Kansas, Kentucky and Wisconsin. The brand’s franchise incentives include low-cost start-up and operations, superior training and support, 15% discount for military veterans and more. For more information about franchise opportunities, visit mrbrewstaphouse.com/franchise-opportunities.

The post Mr Brews Taphouse Gears Up For Growth With Logo Revamp first appeared on RestaurantNews.com.